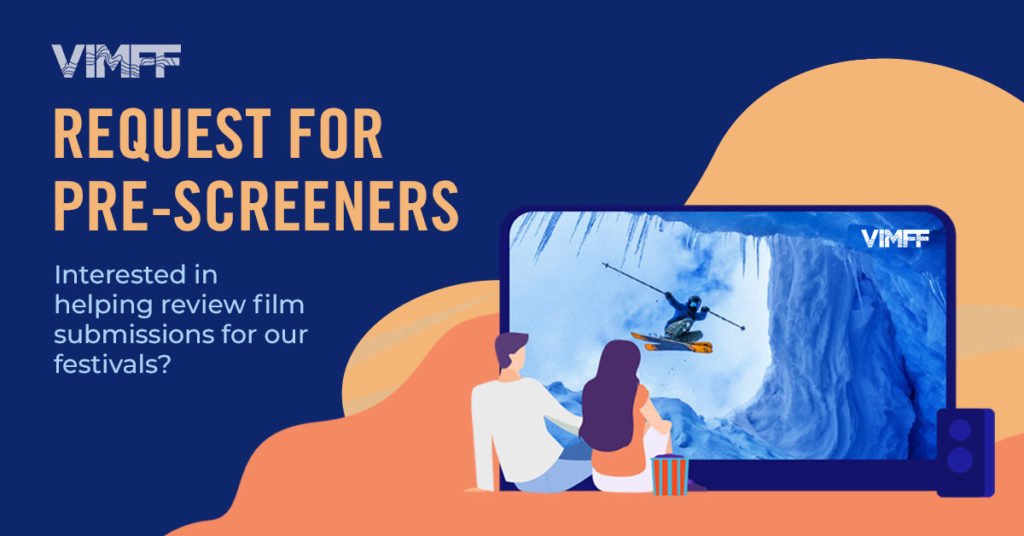 The Vancouver International Mountain Film Festival is looking for volunteer Pre-Screeners to review our film submissions for both our main festival in February and our Fall Series in November.

After each film submission period concludes, we have a few weeks to review the films that have been submitted. The goal is to curate an inspiring program for our upcoming festivals. Currently, our film submissions for the VIMFF 2023 are open through November 15, 2022. The Pre-Screeners role will be to review a specific batch of films and rate them from 1-10, along with leaving a few insightful comments about your rating.

What are we asking for?

We’re looking for individuals who are willing to watch and rate a minimum of 20 hours of submitted film content between November 1 – December 11, 2022. We’ll help you choose a film category to review and then you can watch the films at your own pace through an online platform and leave a 1-10 rating and a few comments. The films range from a few minutes to feature length films.

What do you get in return?

You will receive complimentary access to our Full Flagship Festival Online Streaming Pass and get a pair* of complimentary In-Person Show tickets of choice (all further tickets are 15% off). In addition you will be one of the first to view some of the films that will premiere at our festival before they have been released to the public.

*this is subject to change and may increase