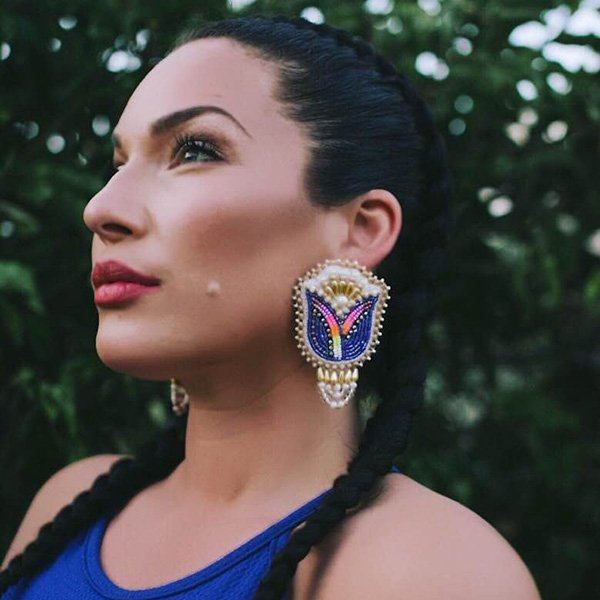 Nikki Sanchez holds a Masters degree in Indigenous Governance and is currently completing her Ph.D. on emerging visual media technology as it relates to Indigenous ontology for climate change mitigation strategies.

A Pipil and Irish/Scottish academic, Indigenous media maker and environmental educator, Nikki is a regular panelist on CBC radio’s the Early Edition and in 2021 she was selected as one of the HATCH 100’s influential change makers and collaborators, who cross-pollinate to accelerate solutions for positive impact and to HATCH A Better World.

As the former David Suzuki Foundation’s “Queen of Green” Nikki focused on environmental journalism, social and digital media to help drive sustainable solutions for a healthy planet. She also created content to bring more racial and gender inclusivity into the environmental movement.

She is the creator and director of “Decolonize Together” a collective of Indigenous and black women who offer decolonial and anti-racism workshops and curriculum creation. Decolonize Together has been teaching and facilitating decolonization and anti-oppression training for universities, school boards, corporations, and NGOs.

Her TEDx presentation is entitled “Decolonization is for Everyone”. https://www.youtube.com/watch?v=pmxD-z1Y8GA

Nikki has been a wilderness guide and environmental educator in the Nuu-chah-nulth territory of Clayoquot Sound where she was mentored by Nuu-chah-nulth elders Tsahsiits and Qaamina Sam. She is a guest contributor for the davidsuzuki.org website, The Hundreds, Last Real Indians, Intercontinental Cry, Loose Lips Magazine, and ROAR Magazine. She served on the BC Women’s Foundation Youth Council, as well as a board member for Sierra Club of BC, Load Bow and Photographer’s without Borders.

In 2020, she released her first book “Spirits of the Coast: Orcas in Science, Art and History” which became a bestseller.

Before They Fall Panel Discussion

Join the filmmakers and characters from ‘Before They Fall’ as they take the stage to discuss their individual relationships with ancient forests and why it’s imperative we protect them.